The Fred Lippitt Woonasquatucket River Greenway provides a valuable crosstown connector of nearly 7 miles from downtown Providence to the city’s western neighborhoods and the nearby town of Johnston. In addition to being named for the river it parallels, the greenway honors a Rhode Island politician and philanthropist who championed the project in the early 1990s as a means to revitalize some of Providence’s poorest and most underserved neighborhoods.

The rail-trail follows the route of the Providence & Springfield Railroad, which was built in 1873 to service the mill villages along the river. Around the turn of the 19th century, the line was acquired by the New York, New Haven and Hartford Railroad, but it fell into disuse by the 1960s.

While the trail’s eastern half is a patchwork of on-road bike routes and off-road pathways, its western half, beginning at Riverside Park, consists entirely of paved trail. Before you set out on your journey, note that the trail lacks restrooms or drinking water, so plan accordingly.

Riverside Park makes a great launching point, with a parking lot, large playground, and signage about the local wildlife, such as great blue herons, great white egrets, and marsh wrens. Moments after starting your trip on the trail’s western leg, you’ll pass an observation platform in the park with a view of the Woonasquatucket River. Continuing on the path, you’ll head northwest past picnic tables, a self-service bike repair station, and swaths of wildflowers. At the end of the park, the trail splits; stay right to continue on the main pathway or veer left to cross a pedestrian bridge over US 6 into Merino Park, which has another playground and athletic fields. Although you’ll parallel the highway a short distance, the tree-filled stream valley between you and traffic keeps the experience pleasant.

Upon completing the first mile, you’ll see a spur off to your right that provides access to Manton Gateway Skate Park and Manton Avenue beyond. A little farther on, you’ll be presented with another opportunity to veer off the trail and loop around the Button Hole Golf Course; otherwise, you can continue straight ahead. At the intersection of Greenville and Traver Avenues, you pop out of the lush greenery and enter a bustling area with a couple of restaurants nearby before crossing the street and heading back into the brush. From here, it’s less than a mile to trail’s end; you’ll continue through wood-lands, but homes and industry become noticeable just beyond the trees. The path stops at a dead end for Lyman Avenue in the heart of a residential neighborhood in Johnston. There’s trail signage here but no parking.

To explore the eastern half of the trail, Riverside Park is also an optimal starting point. From the park entrance, you’ll turn right onto Aleppo Street, followed by another right at the very next intersection, which is Manton Avenue. Along Manton, you’ll pass an eye-catching redbrick industrial space, which was once a worsted mill; today it’s home to a flea market and furniture store. In two blocks, turn left onto Delaine Street. After 0.2 mile, you’ll turn left onto Sonoma Court, which quickly dead-ends into paved trail, where you’ll be greeted with a vibrant mural.

Back on the pathway, you’ll pedal past Rising Sun Mills, another monument to Providence’s rich industrial history. Although the mill has been converted into commercial space and loft apartments, you can take a quick side trip here to see the remnants of the dam and water control mechanism that once powered the mill, as well as view a fish ladder that allows migratory fish to bypass the dam and move freely between Narragansett Bay and the Woonasquatucket River watershed. This section continues through the adjacent Donigian Park to its end at Valley Street, a total of 0.3 mile of paved-trail riding. East of Donigian Park, the route will be mostly on-road to the end of the line, another 1.5 miles.

After crossing Valley Street, continue straight onto Amherst Street, which you’ll travel on for just one block before turning left onto Tuxedo Avenue. In another block, you’ll come to Atwells Avenue; cross the street and you’ll see the entrance to another section of paved trail on the other side of the cross-walk. This section of paved trail lasts 0.2 mile, ending at Eagle Street. At the intersection to your right, hop on the marked on-road bike lane along Kinsley Avenue, which heads northeast. The sparsely trafficked avenue becomes Providence Place closer to downtown.

As you approach trail’s end, you’ll see the elevated portions of I-95 over-head, and rising just beyond that, Providence Place, the largest mall in the state. An intriguing path will take you under the mall, alongside the Woonasquatucket River (which the building straddles), and over Amtrak Northeast Corridor rails that service nearby Providence Station.

The route officially ends as you emerge on the other side of the mall; there’s a bike rack here and it’s worth taking some time to enjoy the shopping and restaurants that the mall has to offer. Less than 0.25 mile north is the state capitol, and just across the street and down some steps is vibrant Waterplace Park, a lovely riverfront walk with public art, outdoor concert space, and more places to eat—the perfect ending to your biking adventure. 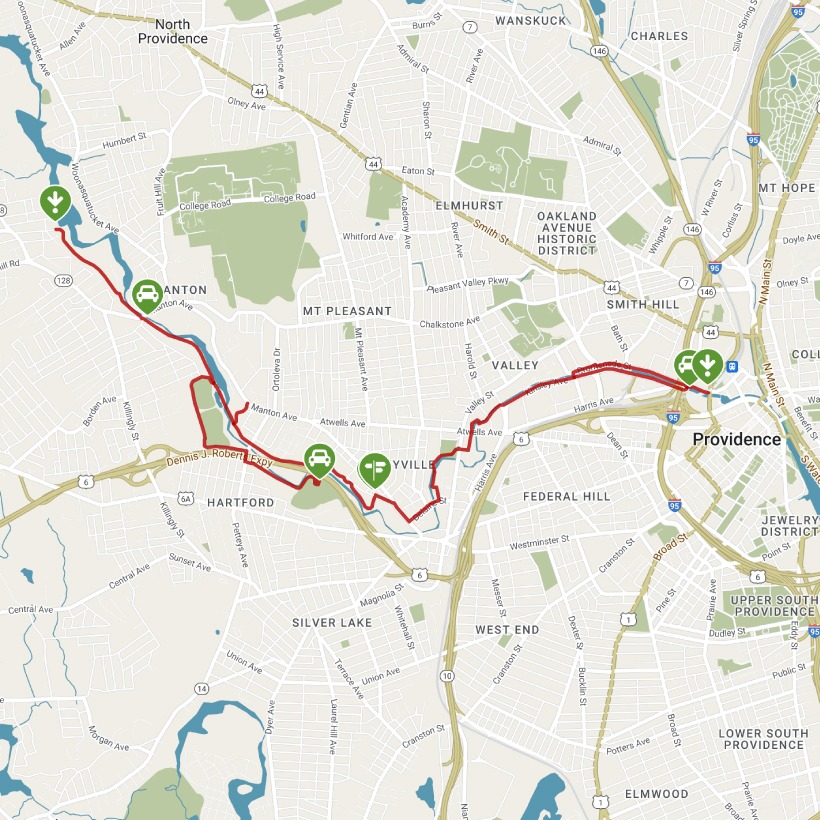