The Air Line State Park Trail winds nearly 55 miles from the northeast corner of Connecticut, where the state borders Massachusetts, down to East Hampton in the heart of the state. The pathway is nearly seamless, with only one major gap through Putnam. Over the state border, you can make a contiguous connection to the Southern New England Trunkline Trail, which heads more than 20 miles east to Franklin, Massachusetts.

If you begin your adventure on the trail’s northern end, note that parking is not available at the tip. Instead, find parking 0.5 mile farther at the intersection of New Road and Thompson Road in East Thompson. From there, you’ll head southwest on the trail. The trail feels completely secluded, as it has few entry points and no view of the roads or sound of traffic for miles.

A word of caution about the trail’s surface, however: The original ballast covers this 6-mile northern section and it becomes bumpy and rocky at various points. Riders often have to dismount due to the uneven nature of the ballast, so a fat-tire bicycle is highly recommended. The trail ends in the southern outskirts of Thompson, near the border of neighboring Putnam.

A gap of 7.5 miles lies between the northern and southern sections of the Air Line State Park Trail. Pick up the pathway again at the intersection of Averill Street and Railroad Street in Pomfret Center, a small village nestled within the larger Pomfret, one of the oldest towns in the state with its incorporation in 1713.

When you arrive in downtown Willimantic, you’ll find that the trail ends at Jillson Square Park, but with a short bit of on-road riding, you can pick up the trail again just south of the intersection of Bridge Street and Riverside Drive. Traveling west along the Willimantic River, you’ll see the Connecticut Eastern Railroad Museum in 0.8 mile. For history buffs, its vintage locomotives and railroad buildings are well worth a visit. The museum is also adjacent to a juncture with the Hop River State Park Trail, a scenic route heading 20 miles northwest to Manchester. Both trails are part of the East Coast Greenway, which will connect communities along the Eastern seaboard from Maine to Florida.

Heading southwest down the trail, you’ll arrive at a fork in Hebron after 8.3 miles. Keep right to stay on the main Air Line State Park Trail; the other option is a 3.5-mile spur to Colchester. Though the trail is primarily dirt here, this section offers many attractions that make it worthwhile. From the fork, it’s 1.4 miles to beautiful Grayville Falls Town Park, which offers waterfalls and wooded hikes. Nature abounds as you continue along the corridor, and you’ll have access to Raymond Brook Marsh and Salmon River State Forest.

Numerous bridges offer lovely views, including the Blackledge and Jere-my River crossings. When you reach the Bunk Hill Road trailhead parking, you can take an on-road side excursion of 1.4 miles to reach the Comstock Covered Bridge. Originally built in 1791, it’s one of the last remaining historical covered bridges in the state.

From the Bunk Hill trailhead, you’re only 3.6 miles from trail’s end, but there’s still more to see. You’ll cross the Rapallo and Lyman Viaducts, which were originally built in the 1870s and offer stunning views of the surrounding hills and forests. The trail ends in East Hampton, once known as Bell Town for the 30 bell-making companies that settled here.

On the western end of the trail, a 2.3-mile segment opened in the summer of 2018 in Portland. Known as the Portland Air Line State Trail, it starts on Depot Hill Road near Old Middletown Road and ends adjacent to the YMCA Camp Ingersoll. An additional short segment connecting this section to the rest of the trail in  East Hampton is in the works and is expected to be completed in 2019. 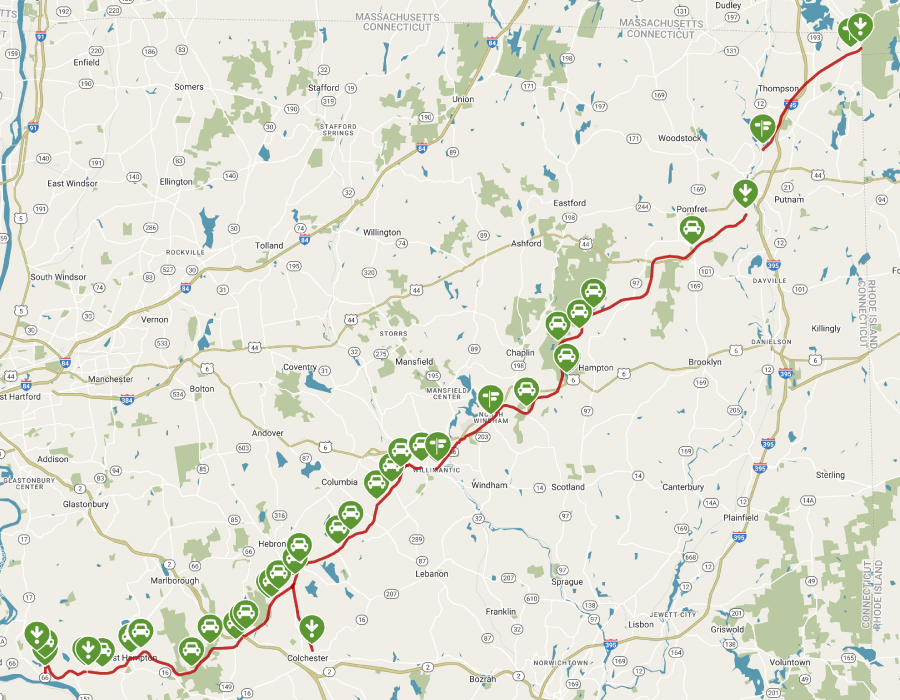