Though the idea for a Cape Cod Canal goes back to the settlers of Plymouth Colony, the waterway didn’t begin construction until 1909. The U.S. Army Corps of Engineers took over operation and maintenance of the canal in 1928. Originally dirt roads on either side of the canal, paved service roads now double as the Cape Cod Canal Bikeway. Although there is no easy off-road route to cross the canal, each side of the bikeway offers a unique experience for trail users.

Starting from the visitor center in Buzzards Bay on the north side of the canal, the trail passes by recreational areas, including access to a short stone-surface trail in an open space nature preserve. In 0.6 mile this figure eight trail also features playground equipment, including a zip line and parcourse. Located just before and just after the Bourne Bridge, 1.3 miles into the trail, are RV camps with grills and recreational areas.

The trail offers scenic views of the canal and chances to watch native birds scouting for fish or spot rabbits hopping across the trail. After passing under the Sagamore Bridge, 4.7 miles into the trail, you will soon reach the northern trailhead at the Scusset Beach State Reservation (7.1 miles from the visitor center). Sand dunes and grasses waving in the breeze mark the way to the picnic area, swimming beach, and rocky peninsula for walking at the end of the trail. Starting from the Tidal Flats Recreation Area in Bourne on the south side, head north through a parking lot and pass the Cape Cod Canal Railroad Bridge on your left. Interpretive signage shares the story and purpose of the railroad bridge. Not much farther along (0.6 mile into the trail) is trailside access to the Aptucxet Trading Post Museum. Settlers founded the trading post in 1627 to trade with American Indians and the Dutch for essential goods such as salt, sugar, and furs to pay off the debt incurred to reach Massachusetts.

Past the museum, canalside residential houses offer local charm on the right, while open views of the canal and Bourne Bridge (1.5 miles into the trail) dominate to the left. After the bridge, the trail leaves the residential neighborhoods behind and becomes abundant with trees and wildlife. Perhaps the most distinctive feature of the path is its use as an access point for recreational fishing along the shore of the canal. Many bicyclists even have fishing pole carriers on their bicycles.

After passing under the Sagamore Bridge 4.7 miles into the trail, the trail parallels the Cape Cod Central Railroad; you can see the ties of the rail line to your right. Nearing the end of the trail (6.4 miles from the Tidal Flats Recreation Area in Bourne) is an industrial area with a power plant and pipelines on the right and industrial docks on the left. Not long after, you will reach Sandwich Marina Park, where the trail ends at 6.7 miles. Here, the U.S. Army Corps of Engineers maintains the Cape Cod Canal Visitor Center, where you can learn more about the history and natural area. The sprawling marina offers multiple dining options—perfect after a trail ride—and is a close bike ride into town if you want to explore Sandwich further.

Although the Tidal Flats Recreation Area in Bourne represents the south side of the trail, Friends of the Bourne Rail Trail—and Friends of Falmouth Bikeways—hope one day to extend the trail south to connect to the northern end of the Shining Sea Bikeway in Falmouth. In addition, the East Coast Greenway may incorporate the Cape Cod Canal Bikeway into a new coastal route linking Boston and Providence, Rhode Island, via Cape Cod. 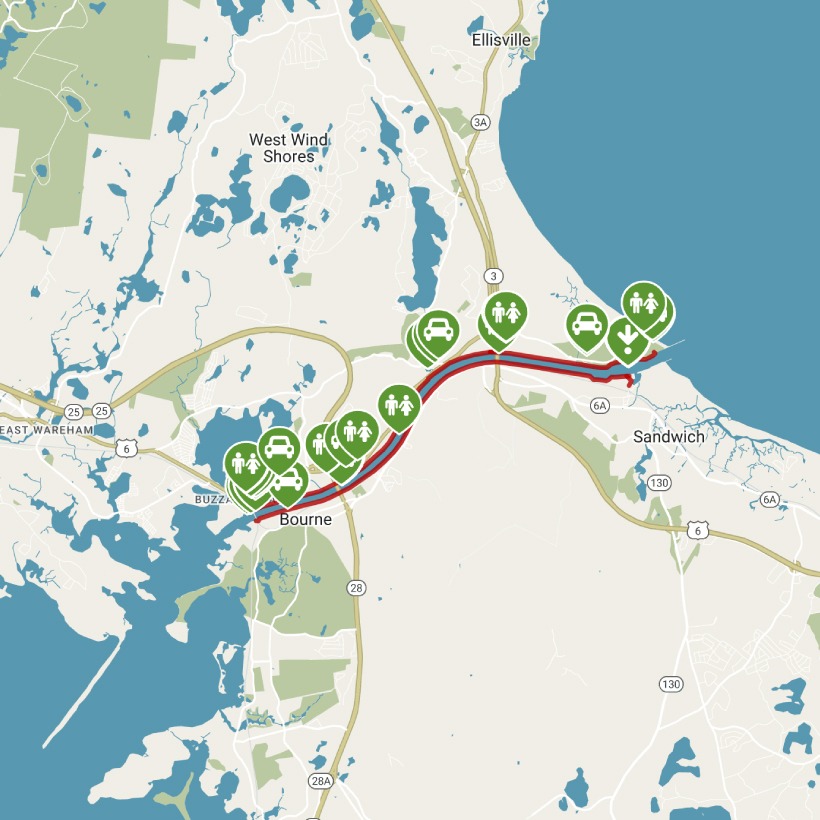