The Nashua River Rail Trail stretches from southern Nashua, New Hampshire, to downtown Ayer, Massachusetts, connecting to the towns of Pepperell and Groton. The trail is built on the former rail corridor of the Hollis Branch of the Boston and Maine Railroad. The last freight line to run on the rails was in 1982. Now, trail users of all ages and abilities can be seen along the rail-trail. Deciduous forests border most of the path, offering spectacular views of fall foliage and providing shaded travels in the spring and summer. The pathway winds through several wetlands and waterways, with ample opportunities to take in the view and see turtles, birds, and other wildlife along the way.

From the northern endpoint in Nashua, New Hampshire, the trail begins next to a small pond in a residential area and heads south into a forested area. In about a mile, you’ll reach the Massachusetts state line, followed by the town of Pepperell, Massachusetts, in another 3.2 miles. The trail opens up into a small trailside plaza in East Pepperell with a town clock, bike maintenance station, and signage celebrating town hero Colonel William Prescott, who is attributed with saying, “Do not fire until you see the whites of their eyes!” at the Battle of Bunker Hill.

Several shops line Main Street across from the plaza. If you have time, head north on Groton Street to see the historical covered bridge that crosses the Nashua River. At a small park on the east bank of the river, you can learn about the exploits of Prudence Wright, considered to be the first American woman to hold—and receive pay for—a military title.

The route continues past Pepperell Dam on the Nashua River. Pepperell Pond, behind the dam, is a well-known fishing spot for largemouth and smallmouth bass and often hosts fishing tournaments. This portion of the trail borders the J. Harry Rich State Forest—a great place to explore on foot with several hiking and horseback riding trails and excellent river views. The forest can be accessed off Sand Hill/Nod Road near the trail parking area.

Just over a mile later, a small railway bridge over Main Street brings you into Groton, Massachusetts. The landscape soon changes from forest to vast meadows. A mile farther, you’ll come upon Groton School Pond. This is a great resting spot, with rough-hewn granite benches and views of both forest and farmland. The pond is rich with fish, turtles, birds, and other wildlife.

The mix of forest and meadow views continues into the town of Ayer, where the trail ends at Main Street. Visit the downtown area for a taste of its past as a major railway hub and Civil War army training camp. 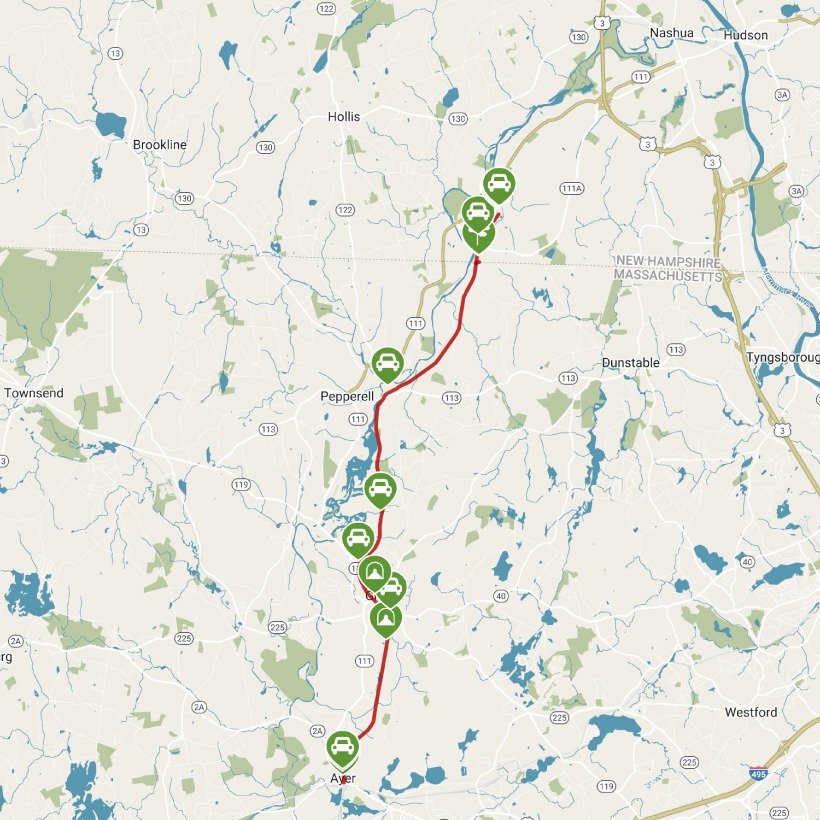