The Neponset River Greenway is a south Boston jewel, utilizing the best in design and construction standards as it winds through the Neponset River valley, offering a low-stress, high-quality experience.

American Indians used the Neponset (meaning “harvest river”) for fishing and as a fur trading route with settlers arriving in the 1600s. The river played an important role in the development of Milton and Boston, though it was an early obstacle to settlers. There are several well--designed access points to the river if you decide to explore this riparian corridor by kayak or canoe, both excellent choices. If you prefer to run, walk, or skate—or if you have a foldable bike—you can take one of the Massachusetts Bay Transportation Authority (MBTA) trolleys that run along the trail’s southern stretch every few minutes.

Unless you are a very experienced rider who doesn’t mind riding in occasional traffic along the Truman Parkway and sharing rough and narrow sidewalks with pedestrians, we suggest you start your adventure at either the northern trailhead at Tenean Beach or the MBTA Mattapan Station to the south. You can park your car for a small fee at the station. From the station, the northern endpoint of the 2-mile Pine Tree Brook/Popes Pond Path is just 1 mile away.

From the front of Mattapan Station, go to the corner of River Street and MA 28 and look for a restored old transportation building decorated with several murals located next to MA 28. The trailhead is behind this building on a boardwalk suspended along the Neponset River, with the river on your right.

Immediately you will feel the difference from the busy streets adjacent to this tree-lined river valley. In 0.3 mile, you’ll cross a new bridge that takes you over the MBTA tracks. On a sunny day, the reflective colored discs and tree imagery of the fence will reflect onto the bridge’s concrete deck. It’s worth stopping for a bit to take in this creative art, as well as the orange and yellow trolleys zooming underneath as they approach the station’s turnaround point. The bridge has a ramp connecting to another parking lot to the right of the bridge, which makes for an alternate starting point.

The trail’s canopy is very dense in this southern section. The asphalt path connects to adjacent recreation fields and businesses now located in repurposed brick manufacturing buildings along this once busy industrial corridor. The building that housed the first chocolate factory in America—Baker’s Chocolate—opened in 1765 on what is now the trail corridor (it eventually became General Foods Corporation and later Kraft and is now based out of another location). The trail corridor was also home to America’s first commercial railway, the Granite Railway Company, which supplied granite to the Bunker Hill Monument in Boston. Many of the retaining walls and underpasses along the corridor feature walls that have been beautifully painted by the Boston Natural Areas Network.

At the halfway point, the trail goes under the MBTA tracks and spills out to the river’s marshes, providing a wonderfully dramatic experience. At this point, it is now considered a rail-with-trail. From here to the end of the route, you might share the trail with some fishermen as you pass through the Neponset River Reservation, which extends from Milton to the Boston Harbor.

The path hugs the Neponset River before passing Joseph Finnegan Park on the right. The city is creating several other adjacent parks like this one, with short trail loops of their own. As Taylor Street comes to an end, turn left onto Water Street for three short blocks on residential streets to the endpoint at Tenean Beach, where you can enjoy views of downtown Boston. 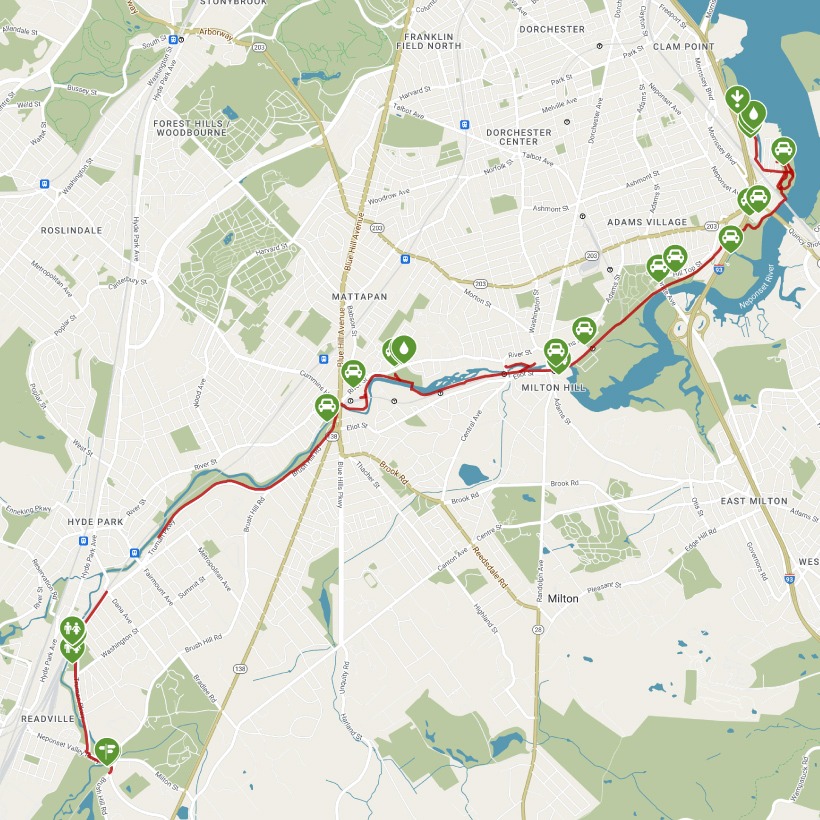