With spectacular maritime views and an abundance of coastal wildlife, the East Bay Bike Path offers a spectacular New England experience. Inducted into the Rail-Trail Hall of Fame in 2009, the route is one of the most popular multiuse trails in Rhode Island. The paved pathway travels just over 14 miles between Providence and Bristol, visiting eight parks as it skirts the historical water-fronts that played roles in local shipbuilding, transoceanic trade, and manufacturing.

The rail-trail follows a railbed whose various owners helped shape East Coast railroads over a century. The Providence, Warren and Bristol Railroad completed the line in 1855. The Old Colony Railroad leased it beginning in 1891, but it soon came under control of the New York, New Haven and Hart-ford Railroad (the New Haven). Penn Central acquired the New Haven in 1969 and discontinued the Bristol-Providence line in 1973. The state built most of the bike trail between 1987 and 1992.

India Point Park is a good place to embark on a journey on the East Bay Bike Path. The trail follows a ramp up to a pedestrian bridge named George Redman Linear Park, memorializing a local bike advocate. The bridge reopened in 2015 after serving since the 1930s as the eastbound span of the Washington Bridge.

Arriving in East Providence, you’ll head south on First Street for two blocks before regaining the trail, which is separated from Victory Parkway by a split rail fence for the next 1.1 miles. You’ll drop down a steep embankment to the old railroad corridor spanning Watchemoket Cove on a causeway, where the railroad was double-tracked and the other set of tracks is often visible. You’ll have unobstructed views of the Providence skyline and shipping facilities from here and up ahead at Squantum Woods Park, where some 90 bird species have been recorded.

The next mile is wooded before you reach the Riverside community. You’ll recognize an old railroad station just before Lincoln Avenue, and in another mile you’ll cross Crescent View Avenue. Here you can turn right on a 0.5-mile side trip to the Crescent Park Looff Carousel, an 1895 amusement ride that features 62 carved figures and four chariots. It’s listed on the National Register of Historic Places.

The trail veers away from the bay for 6 miles as it passes through Barrington; the bridges crossing Barrington and Palmer Rivers are popular fishing spots. Commercial districts in Riverside, Barrington, and up ahead in Warren and Bristol all offer opportunities for snacks and refreshments. The trail ends along Bristol Harbor, just past the entrance to Colt State Park.

The stature of the East Bay Bike Path, one of the longest trails in the state, will grow with a connection to the developing Blackstone River Greenway, which extends into Massachusetts. The bike path is also a part of the East Coast Greenway, a growing trail network between Maine and Florida. 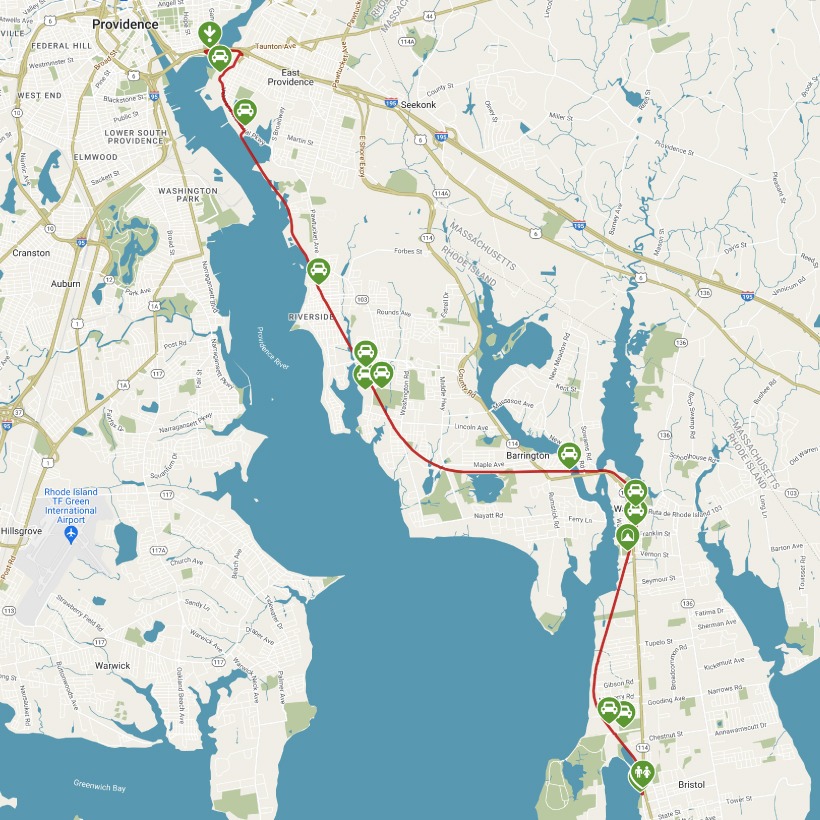