The Southern New England Trunk Line Trail (aka the "SNETT") was designated as a National Recreation Trail in 1994. It is built upon a segment of the former right-of-way of the New Haven Railroad's Midland Division, which operated between Boston and Putnam, CT.

Today, it runs nearly uninterrupted for 22 miles between Grove Street near the southeastern edge of Franklin State Forest and the Connecticut state line in the Douglas State Forest. Although the trail is open and very scenic, note that much of it is currently unimproved with heavy overgrowth best suited to hiking and mountain biking.

There is a break in the trail in Blackstone from Route 122 at Castle Hill Way to the Depot parking lot off Canal Street. There's also a tricky crossing at Worcester-Providence Turnpike/Route 146 and Route 146A. Use caution when attempting to link the broken trail segments and never use active railroad bridges for crossings. A parking brochure is available which also includes descriptions of how to bypass the breaks.

3.5 miles between the Blackstone Depot Parking area and the Adams Street Parking area in Uxbridge have been paved. 1.5 miles in Bellingham between Prospect Street (Franklin) and Center Street (Bellingham) has a stone dust surface. The first 1 ¼ miles between Grove Street and Prospect Street (Franklin) has a smooth dirt surface. The same surface also exists from Depot Street to Route 96 in Douglas.

The SNETT is the eastern leg of the larger Titanic Rail Trail network, which is planned to stretch more than 60 miles through south-central Massachusetts. West of the SNETT, another developing piece of the Titanic Rail Trail, known as the Grand Trunk Trail, is available in disconnected sections in Brimfield, Sturbridge, and Southbridge. Another part of this corridor, known as the Quinebaug Valley Rail Trail in Southbridge, and the Quinebaug River Valley Rail Trail in Dudley, is cleared from the Saundersdale section of Southbridge to the Connecticut state line in Dudley near Quinebaug, and from the Connecticut state line 3 ½ miles east of there to the French River Bridge at the Dudley/ Webster line.

Across the border, in Connecticut, the trail joins the Air Line State Park Trail which tavels southwest for 52 miles to the town of Hampton, CT. 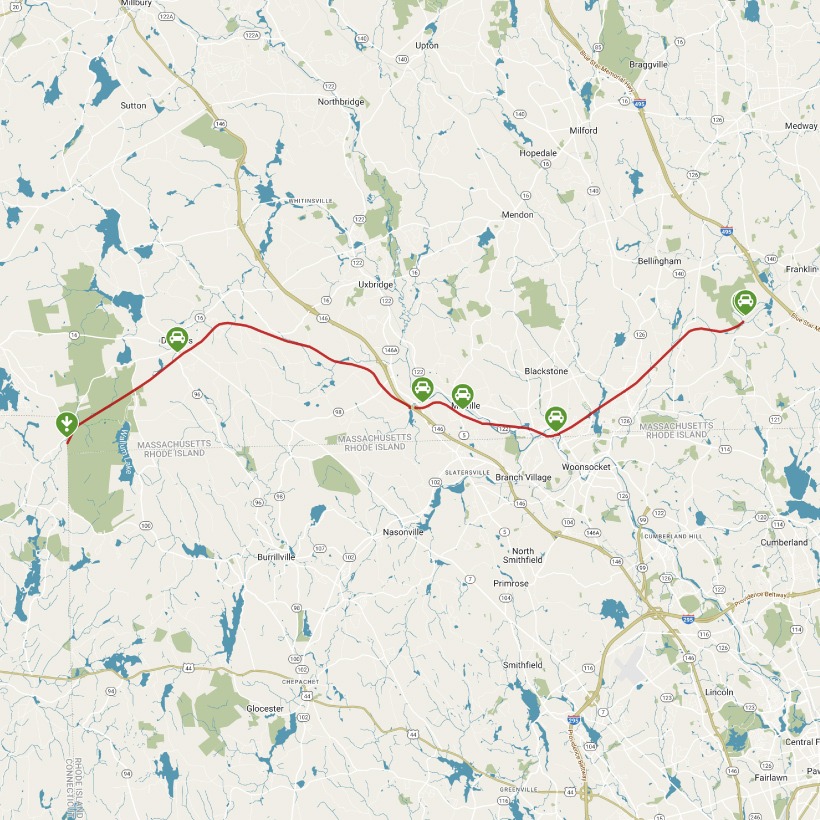