Imagine a wealthy 19th-century textile mill owner building an 8-mile railroad to get coal to his plant or products to market, and then adding accommodations to carry vacationers to beach resorts or voyagers to steamships: that’s the story of the short-line railroad that later became the William C. O’Neill Bike Path. At just over 7 miles, it runs from Amtrak’s West Kingston Station to within about a mile of its original destination in the town of Narragansett Pier.

The paved rail-trail in southern Rhode Island is named for the late senator who spearheaded development of the trail, previously known as the South County Bike Path. (Washington County is locally known as South County.) It follows the railbed of the Narragansett Pier Railroad, opened in 1876 by a man who owned mills in Wakefield and Peace Dale. In 1921, rail buses—actual buses adapted to ride the rails—replaced the passenger cars. Locals affectionately called these unique buses Micky Dinks after two of the drivers. Passenger service ended in 1952, though freight service continued for an-other 25-plus years. The first section of the rail-trail opened in 2000.

A good place to start is the Amtrak station in the West Kingston community. Built by the New York, Providence and Boston Railroad in 1874, the station was shared with the Narragansett Pier Railroad to transfer passengers heading to the beaches. You’ll head south on the trail under a dense canopy of trees. Although you won’t be able to see it from the pathway, the University of Rhode Island is nearby; as you approach your first mile on the trail, you will reach a connecting trail that travels 2.1 miles to the campus.

This wooded area fringes the Great Swamp Wildlife Management Area, where, particularly in the spring and fall, you’ll encounter flocks of migratory birds. Also in the woods is the Tefft Historical Park, where archaeological sites date from early Narragansett tribal occupation through Colonial settlements. At about mile 4, you’ll enter the Tri-Pond Park, where you’ll find ponds, streams, nature trails, and a nature center.

Emerging from the woods in Peace Dale (named for the railroad builder’s mother), the trail takes Railroad Street for 0.2 mile. About midway on the left sits the renovated train depot, now a business. Crossing Church Street, you return to the trail. In 0.7 mile, you cross Main Street in Wakefield and see a replica train station. Arriving at the commercial center on Kingstown Road, the trail follows MacArthur Boulevard for 0.2 mile, then veers right back onto the trail.

The trail ends at Mumford Road, but across the street is a developing new section that’s scheduled to open in late 2018 or early 2019. It will travel behind Narragansett Elementary School and end at the parking lot for the Narragansett Community Center. From here, another future segment will complete the journey to Narragansett Town Beach on the former right-of-way of Narragansett Pier Railroad’s main rival, the Sea View Railroad. 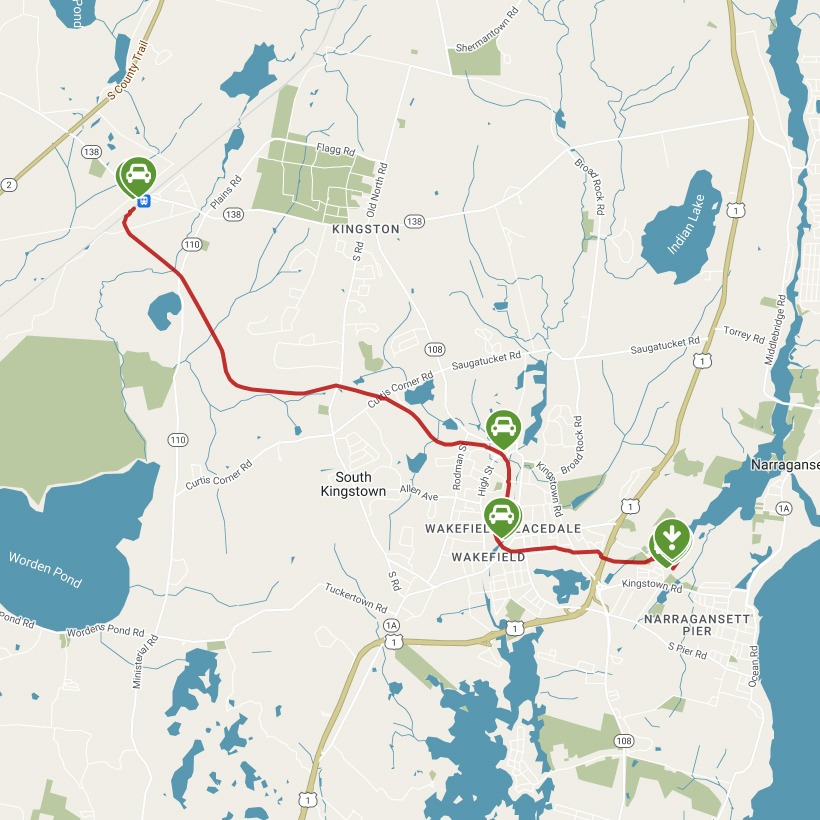