Many commuters choose the Minuteman Commuter Bikeway for freedom from congested traffic in the northwest Boston suburbs. For others, the 10.1-mile paved trail between Cambridge and Bedford serves as a historical route through the opening salvos of the American Revolution. The rail-trail roughly traces Paul Revere’s midnight ride in April 1775 to warn local militias about advancing British troops. Today, it connects a rapid transit station in Cambridge with Arlington, Lexington, and Bedford.

The rail-trail uses a corridor first laid out in the 1840s for the Lexington & West Cambridge Railroad, which later became the Boston & Lowell Railroad in 1870 and the Boston and Maine Railroad in 1887. The Massachusetts Bay Transportation Authority (MBTA) bought the line in 1976, shutting down passenger service in 1977 and freight service in 1981. The Minuteman Bikeway opened in 1993 and joined Rails-to-Trails Conservancy’s Rail-Trail Hall of Fame in 2008.

Starting at the MBTA Alewife Station in Cambridge (bikes are allowed on Red Line trains in off-peak hours), you’ll immediately pass the Alewife Linear Park trail that heads east toward Somerville and the Fitchburg Cutoff Path heading west (both part of the Mass Central Rail Trail). The trail passes the 100-acre Spy Pond in Arlington before arriving at a short, on-road section in historic Arlington Center at mile 1.5. Here, follow the signs, bike lanes, and pedestrian signals to cross Swan Place, Massachusetts Avenue/US 3, and Mystic Street/MA 60 to regain the bikeway on the north side of the intersection.

Trailside displays tell the history of these first battles of the Revolutionary War. One of the first is in Arlington (named Menotomy in Colonial times), where you’ll learn about the Battle at the Foot of the Rocks located just a couple of blocks off the trail. About 3 miles later in Arlington, you’ll pass the 183-acre Great Meadows, followed by the Tower Park picnic grounds—both sites of Revolutionary battles—-and the Munroe Tavern, used as a headquarters during the conflict.

The Lexington Visitor Center sits next to the trail, which is a block away from Lexington Battle Green, where minutemen resisted British soldiers. The trail veers away from Massachusetts Avenue as it leaves Lexington and becomes a wooded corridor through quiet neighborhoods for its last 3.7 miles to Bedford Depot Park. Railroad history is celebrated here at a vintage depot freight house and a restored passenger rail car. The trail meets the northbound Narrow-Gauge Rail-Trail across Loomis Street. In the planning stages, an extension of the Minuteman Bikeway will continue west along Railroad Avenue for 0.3 mile to meet the Reformatory Branch Trail toward Concord.

The trail can be congested with bicyclists during morning and evening commutes and with pedestrians on weekends and lunch hours. Local laws require that bicyclists dismount when using sidewalks in city centers. Restaurants, pubs, markets, and bike shops are located close to the path.

Parking and Trail Access
To reach the Cambridge trailhead by subway, take the MBTA Red Line to the Alewife Station. Bicycles are allowed on weekends and during off-peak hours on weekdays; see mbta.com for details. A Blue Bikes bike-share station is located at the Alewife Station (bluebikes.com). Pick up the trail on the north side of the terminal.

To reach the Cambridge trailhead by car from I-95, take Exit 29A to MA 2 toward Boston. Go 5.9 miles and take the Alewife Station exit. The Alewife Station Access Road becomes Steel Place. Go 0.4 mile and turn left into the parking garage (fee charged). The trail starts on the north side of the building.

To reach Bedford Depot Park from I-95, take Exit 31B onto MA 4 N/MA 225 W toward Bedford. Turn right, and go 1.8 miles. Turn left onto Loomis St. In 0.3 mile look for Bedford Depot Park on the left and turn into the parking lot. The trail starts at the locomotive display at the west end of the park. 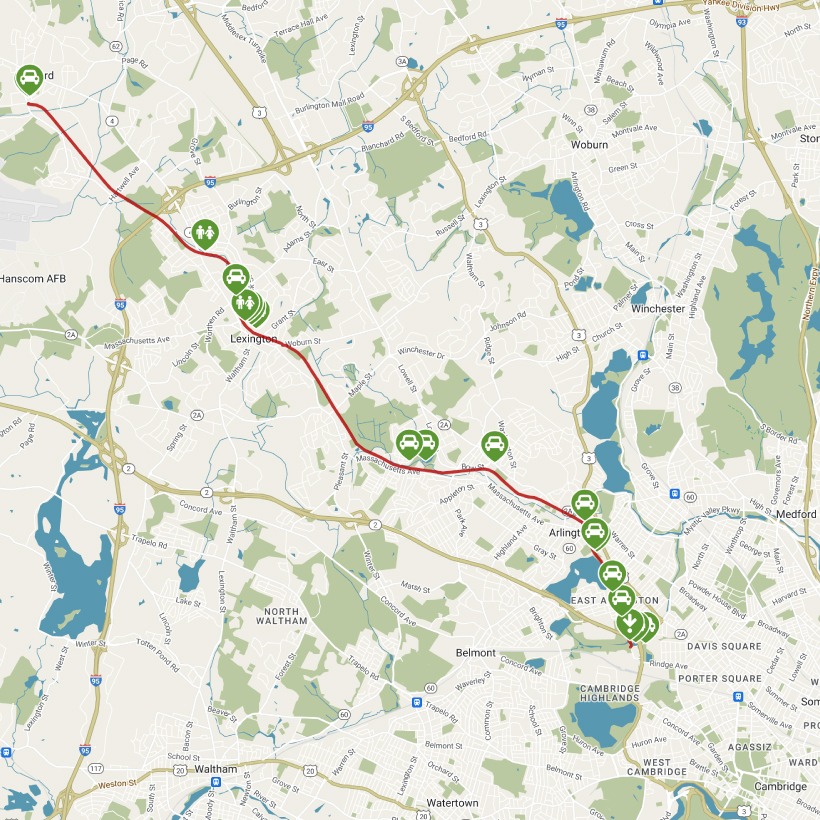