The Charles River Bike Path, also referred to as the Charles River Greenway, offers a paved, 22-mile route from Boston to its western suburbs. The trail is also part of a larger, developing network called the East Coast Greenway, which stretches from Maine to Florida.

A large section of the trail, beginning on its eastern end and extending 16 miles, is named after Dr. Paul Dudley White, a prominent cardiologist and proponent of preventative medicine such as exercise. This Dr. Paul Dudley White Bike Path hugs each side of the Charles River through Boston, Cambridge, and Watertown.

In many sections of the route, there are multiple parallel trail options for those who’d prefer an unpaved surface or would like to stay further from the road activity. A number of architecturally interesting bridges will greet you as you enter Cambridge from Boston, allowing you to create shorter routes on both sides of the river as opposed to the larger loop. While busy roads parallel the trail on both sides of the river, most of the route has trees and green space along the way. Along the way, you can enjoy watching boats skim by and even try your hand at a variety of water sports that are available to the public at numerous locations.

Starting at the famed Museum of Science in Boston and heading into Cambridge, the Charles River will be on your left for the first half of the loop. In 2 miles, Massachusetts Institute of Technology’s campus will greet you on the right, followed by Harvard University in 2.6 miles. Continuing another 3.8 miles into Watertown, you’ll pass the Watertown Yacht Club to your left as you curve around the river, followed by the Pat and Gabriel Farren Playground on your right, just before Irving Street.

If you’d like to extend your ride farther at this point, you can continue on the Charles River Bike Path beyond Watertown west to Waltham. This option provides the opportunity to visit Waltham’s Charles River Museum of Industry and Innovation.

Otherwise, cross the Galen Street Bridge to begin the other side of the loop back to Boston. There are a number of athletic facilities, as well as the Northeastern University Boathouse, featuring impressive modern architecture as you head east. Keep an eye out for rowers carrying their boats across the trail. In 2.9 miles from the Galen Street Bridge, you’ll come to the Charles River Reservation. This 20-mile stretch provides a quiet and natural experience with a dock set in the water, allowing you to enjoy an intimate view of the river as you curve around Soldiers Field Road, passing Harvard Stadium and Soldiers Field Park Children’s Center on your right.

As you approach Boston, beautiful views of the city skyline will become visible. The trail traffic will also increase markedly, so stay vigilant. Soon, you’ll pass bridges at Western Avenue and River Street, followed by the Boston University Bridge, with views of Boston University on your right. In 2.3 miles from Boston University Bridge, you’ll come to an enchanting esplanade where the land extends into the water, connecting to the mainland through a series of quaint footbridges. There, you can take a break to catch a performance at the Hatch Memorial Shell, an outdoor concert venue. If nothing is scheduled, you can still marvel at its impressive design while enjoying a snack from the nearby concession stand.

Follow the trail for another 0.9 mile to its endpoint at the Museum of Science. If you’d like to extend your trip at this endpoint, head northeast from the museum for one block to the 0.5-mile North Bank Bridge trail. It begins at Museum Way and Education Street, traverses Cambridge’s North Point Park, and ends in Paul Revere Park, Charlestown. 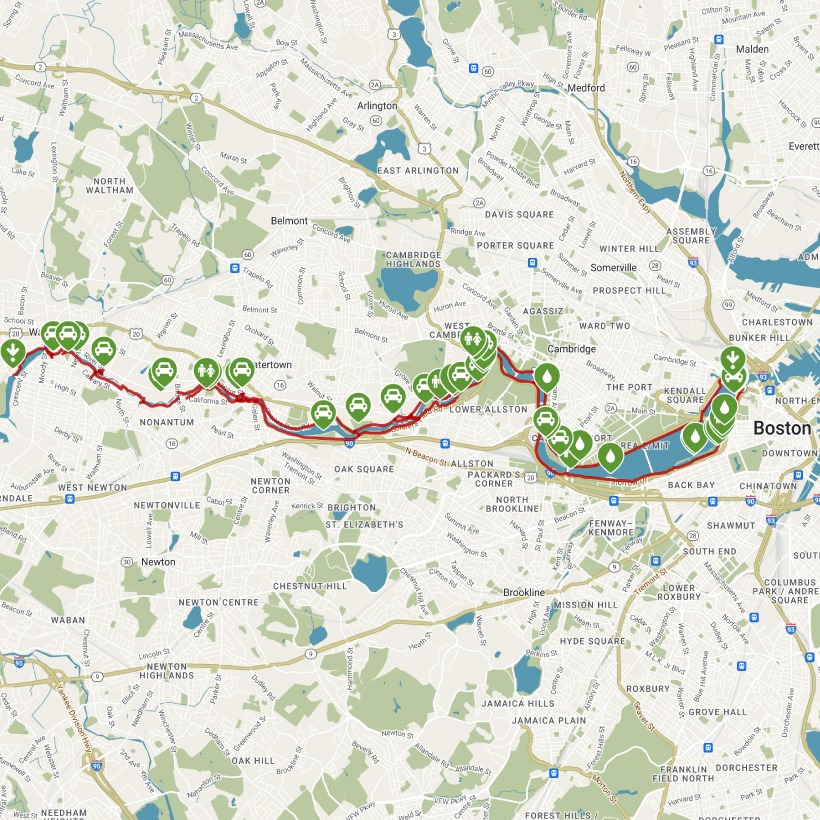