Spanning 57.6 miles from Lebanon to Boscawen, the Northern Rail Trail is New Hampshire’s longest rail-trail conversion. It weaves through Grafton and Merrimack counties and is less than a 2-hour drive from Boston and Portland. The trail was recognized as one of five top trails that have benefitted from America’s Recreational Trails Program. It was also highlighted in a Wall Street Journal article as one of "6 Incredible Bike Trips You Can Do Easily Yourself".

Trail development began in 1996 after the state purchased the Boston and Maine Railroad’s dormant Northern Line. Built in 1847 by the Northern Railroad, the line formed a substantial portion of a Boston-to-Quebec route that was heavily traveled during the first half of the 20th century. While the state owns the rail corridor, two local groups did most of the work to open the trail for year-round use in their respective counties from 2000 to 2014 and continue to be active in the trail’s maintenance and expansion efforts today.

There are many entry points to the trail, depending on how far you’d like to go, and what you’d like to see. The trail map and elevation map can help you plan your journey. Starting from Lebanon at the trail’s northern end, you will travel slightly uphill until you reach the high point of the trail in Orange, from there it is slightly downhill all the way to the end in Boscawen. The journey is easy and scenic as you cross nine short bridges over the Mascoma River in the first 4 miles. The trail skirts the northern shore of the 1,100-acre Mascoma Lake, where you can enjoy a quick swim on a hot day. The trail then enters the lakeside community of Enfield, and goes through Canaan, Orange and Grafton, becoming narrow occasionally and slightly overgrown with plant life. You’ll appreciate the dense tree cover in the summer, however.

About 20 miles past Enfield, you cross into Merrimack County where the trail is upgraded to a crushed stone surface. Seven miles past Danbury, you’ll reach Andover’s Potter Place Railroad Station, restored to look as it did in 1874. The depot’s museum, caboose, and nearby freight house are operated by the Andover Historical Society and open weekends through the summer. There is also a small park and rest stop with picnic tables next to the trail. In one mile, the trail crosses the Blackwater River next to the 1882 Keniston Covered Bridge. In another mile, there are signs that direct you to the restaurants on Andover’s main street, just north of the trail.

East of Andover, the trail is more heavily used, particularly near the Highland and Webster Lake swimming areas. Continuing south, several interpretive signs scattered throughout the remainder of the trail inform trail users of the rail trail’s history. Webster Lake is named for the 19th-century statesman Daniel Webster, whose birthplace is just off the trail on US 127. In Franklin, approximately 1.7 miles past the lake, an on-road connection (0.9 miles) links to the Winnipesaukee River Trail at Trestle View Park in Franklin. You’ll also come across the stone remains of a turntable that once assisted in changing the direction of locomotives. For the remaining 11 miles south, you’ll closely follow US 3 and the Merrimack River to the trail’s end at a cornfield in the southern reaches of Boscawen.

Future plans call for extending the trail on both ends. On the northern end, the paved Mascoma River Greenway is 0.4 miles from the Northern Rail Trail, and offers a scenic 2.5-mile ride, ending at Glen Road. Plans are in place to expand the trail further to West Lebanon. On the southern end, efforts are underway to extend the Northern Rail Trail approximately seven miles to the state capital of Concord. Both extensions are components of the Granite State Rail Trail, a 125-mile project that will eventually span New Hampshire from the Massachusetts border to Vermont. 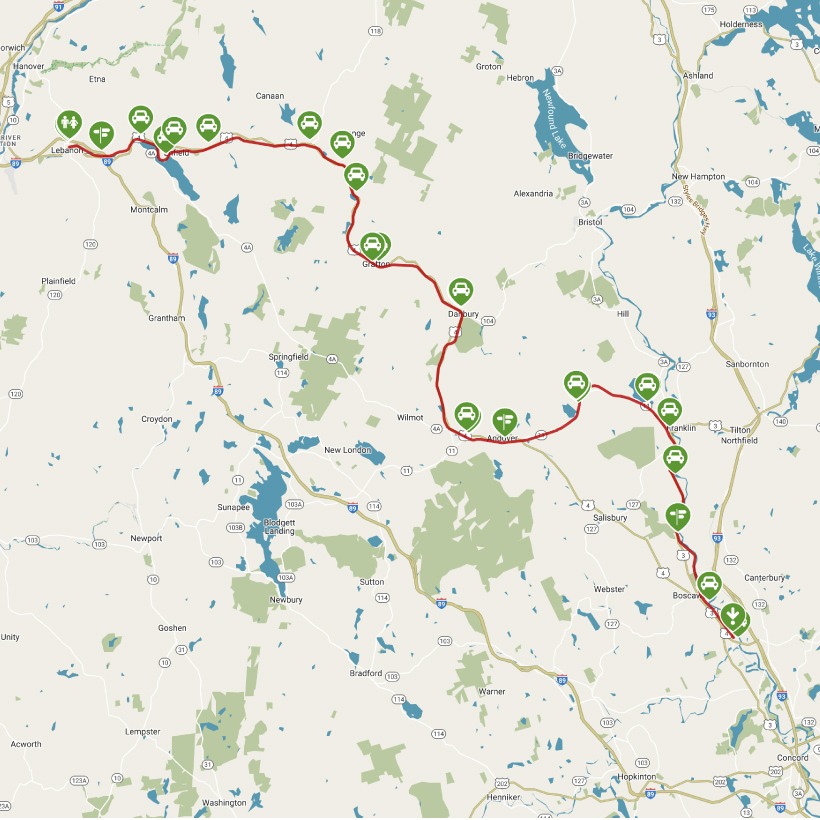