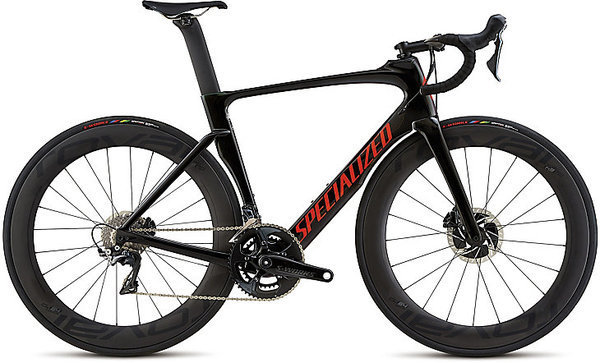 If you're looking for an all-out, wicked-fast race bike, look no further than the Venge ViAS Pro Disc. Every facet of it was born in our Win Tunnel, so it's insanely stiff and snappy and has a 116-second advantage, compared to the Tarmac SL5, over 40km.

In our Win Tunnel, every tube, trailing edge, and design cue was made for speed. It's also Rider-First Engineered to ensure that every frame size experiences uniform performance. Front-end stiffness, meanwhile, was increased by 30% over the Tarmac.

For this iteration of the Venge, however, we spec'd it with a traditional stem and our S-Works Aerofly handlebars. And while there is a slight loss in aerodynamics with this configuration, it makes set-up and changes to the overall fit far easier than with the ViAS system. Of course, this disc version of the Venge also changes the game with undeniable stopping power without any penalty to the aerodynamic profile, so you get powerful hydraulic disc braking without any sacrifices.

Then there's the crisp and ever-precise Shimano Dura-Ace groupset and Roval CL 64 wheels that amplify the overall performance of this race rig. So when it comes to racing, the Venge Pro refuses to be outdone.

- The Rider-First Engineered, FACT 11r frame design has made the Venge the stiffest, most aerodynamic bike that we’ve ever created. Every tube shape, trailing edge, and design cue was influenced by hours of testing in our Win Tunnel, computational fluid dynamics, 3D printed prototypes, and real-world rider feedback. And ultimately, this resulted in the fastest bike we’ve ever made.

- Designed in our Win Tunnel, the fork features a top-end S-Works FACT 11r carbon construction that helps to cut through air like a hot knife through butter.

- A 52/36T S-Works crankset is incredibly stiff, with a chainring grouping that's equally suited to big alpine climbs as it is to throwing down the gauntlet on the flats.